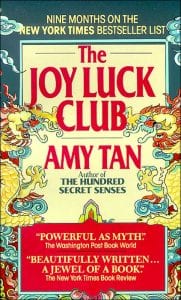 The Chinese mothers want to raise their American-born daughters with an understanding of their Chinese heritage, yet also attempt to save them the pain they felt as girls growing up in China. The daughters, on the other hand, often see their mothers’ attempts at guidance as a form of their mothers not understanding the American culture. Both the mothers and the daughters struggle with issues of identity: the mothers try to reconcile their Chinese pasts with their American presents; the daughters attempt to find a balance between independence and loyalty to their heritage. All of the main characters, both mothers and daughters are all involved in the conflict of the story. I think that Jing-Mei will be able to create a bridge between the 2 generations, cultures, and countries.

Compared to “Your Real Doctor Will See You Shortly”, this book has a completely different tone and emotion coming from the author. They talk about two completely diffferent subjects, yet they are similar in certain ways a reader wouldn’t be able to see at a first look. They both consider the different ways to react to any problem that comes their way. The daughters and the interns both act similar when it comes to trying to figure who they are.

Welcome to your brand new blog at Edublogs!

To get started, simply visit your blog’s dashboard, edit or delete this post and check out all the other options available to you.

We can walk you through step-by-step in our guide to getting started with your blog.